You have to love the following bullshit phishing Hang Seng Bank scam. I say this because they’ve actually provided a bit of a story leading up to their scam. Shit, they even provide a link to a news story in order to lend credibility to their lie. I’ve posted the scam in its entirety below. 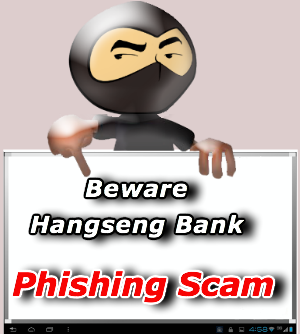 This is a Life time Opportunity and a genuine opportunity for both of us. I am Wai Chung Lam,Vice/Chief Executive. with the Hang Seng Bank and I got your profile while insearch for the right
person that suits this transaction and can be of asisstance in this transaction of which if you are interested and serious we
will be through within a couple of days.

Before the U.S and Iraq war our client Lieutenant-Colonel Omar Musa Hussein who was with the Iraq forces and also businessman, made a numbered fixed deposit
for 18 calendar months,with a value of Twenty Seven Million Nine Hundred Thousand United States Dollars  only in my branch.Upon maturity several
notices was sent to him, even during the war which began in 2003.
Again after the war another notification was sent and still no response came from him.

We later found out that the Colonel along with his wife and only daughter had been killed during the war in a suspected car bomb that rocked the
Italian military police headquarters in the southern Iraq city of Nassiriya.

After further investigation it was also discovered that Lieutenant-Colonel Omar Musa Hussein did not declare any next of kin in his official papers including the paper work of his bank deposit.

And he also confided in me the last time he was at my office that no one except me knew of his deposit in my bank.
So now, Twenty Seven Million Nine Hundred Thousand United States Dollars is still lying in my bank and no one will ever come forward to claim it. What bothers me most is that according to the laws of my country at the expiration 12years the funds will revert to the ownership of the Hong Kong Government if nobody applies to claim the funds. Against this backdrop, my suggestion to you is that I will like you as a foreigner to stand as the next of kin to Lieutenant-Colonel Omar Musa Hussein so that you will be able to receive his funds.

MODALITIES:
I want you to know that I have everything planned out so that we shall come out successful. I have an attorney that will prepare the necessary document that will back you up as the next of kin to Lieutenant-Colonel Omar Musa Hussein, all that is required from you at this stage is for you to provide me with your Full Names and Address so that the attorney can commence his job.
After you have been made the next of kin, the attorney will also file in for claims on your behalf and secure the necessary approval and of probate in your favour for the move of the funds to an account that will be provided by you.

There is no risk involved at all in this matter, as we are going to adopt a legalized method and the attorney will prepare all the necessary documents.

Please endeavor to observe utmost discretion in all matters concerning this issue.
Once the funds have been transferred to your nominated bank account,we shall then share in the ratio of 60% for me, 40% for you.

For security reasons reply via my private email: waichungla@yahoo.com.hk and finally I shall provide you with more details of this transaction.

Your earliest response to this letter is appreciated.
This is a Life time Opportunity.

I publish these emails so that people who receive them may find this post and in doing so gain the information so they don’t fall prey to these assholes.

SUN TRUST BANK WARNING Is A Whole Lot Of Bull