The best way to lose weight? I’ve always had issues with my weight. In my early teen years I was as pudgy as hell. I managed to get it off by going vegetarian andÂ  by lifting weights. Over time I managed to put on a lot of lean muscle and burnt off all that fat.

That was great when I was younger but now that I’m in my fifties I’ve noticed that the fat has crept back. That’s the problem with weight, it virtually sneaks up on you. The problem now is that I no longer have the inclination to start a strenuous weight training regime.

My biggest issue with losing weight is that I need some sort of inspiration to help me burn it off. That inspiration came in the form of my Fitbit Charge 2. I did a review on my latest Fitbit a little while back. What I failed to mention in that post is that the Fitbit has given me that inspiration I need to lose that weight by allowing me to challenge myself. 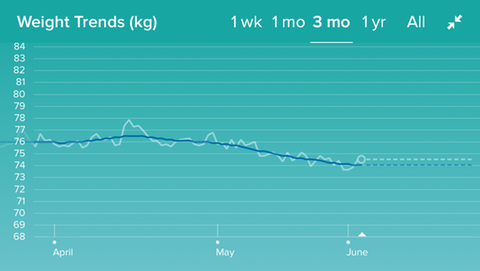 Using the app the Fitbit allows me to record my weight daily. For those of you who think it would be a little tedious to record your weight daily, you could always get the Fitbit Aria WiFi Smart Scale. Personally, I’d rather save the money and enter it manually.

The image above shows my downward weight trend. Because I weigh myself daily I can see when my wight fluctuates, take note of why it did and do something about it. Seeing my weight rise is just one incentive that helps me to rectify it.

The greatest inspiration I get from my Fitbit is from challenging my friends and getting challenged by them. I’m pretty competitive by nature so trying to beat my friends is a great motivator.

Fitbit also has whats called ‘Adventure Races’. This is a competitive challenge where you digitally race a path over several days with the intention of getting to the finish line before the other players. Players that you invite. Special landmarks have panoramic views that are unlocked when you pass them.

The Fitbit has inspired me to go out and actually see the world instead of sitting on the couch watching TV. I hit the Porosa Trail because of my, then, Fitbit HR.