In my video YouTube Subscribers Sub for Sub Idea, I explained why as far as gaining subscribers go the sub for sub idea was not the way to go. That being the case I decided to concentrate on building my YouTube video views. To do this, I need to find the best videos for YouTube. 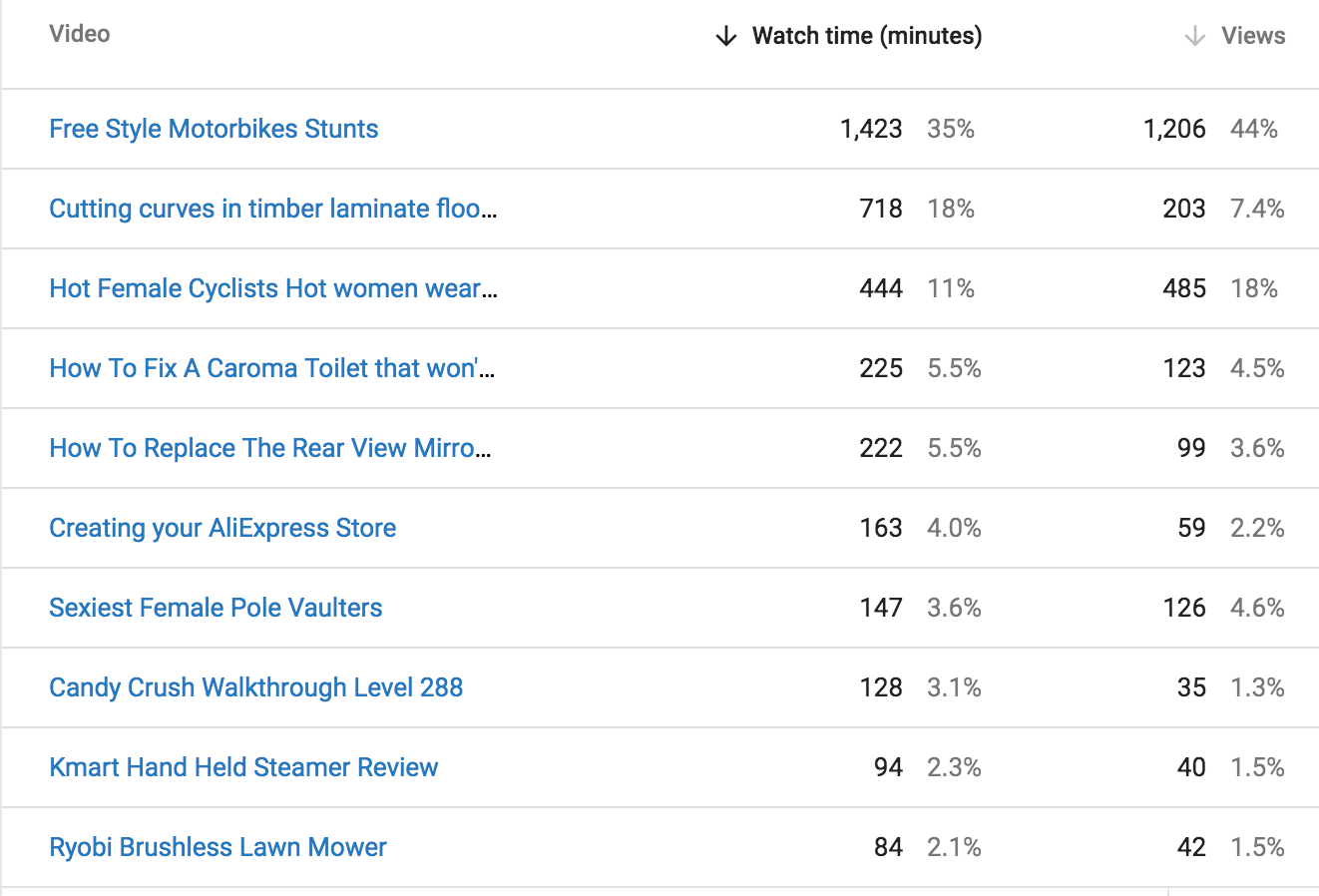 The image above is a screenshot of top 10 best videos for YouTube. You’ll notice that my best video is the freestyle motorbike stunts. You’ll see that so far this month it’s had 1,206 views for a watch time of 1,423 minutes. Considering that video is just over three minutes long means that people aren’t watching it all the way through otherwise the view time would closer to 3,500 minutes of watch time.

My second most popular video is the cutting curves in timber laminate flooring video. While that video has only had 203 views its got 718 minutes of watch time. That’s over 50% of watch time than the top video with only 17% of views. You’ll also notice by examining that image that YouTube is placing more importance on watch time than the number of views.

The next most popular video is my Hot Female Cyclists Wearing Lycra video. You’ll notice that the video has less watch time than views. So, the bounce rate on that video is pretty high. Yeah, I know that bounce rate is typically used with web pages being the percentage of visitors to a particular website who navigate away from the site after viewing only a single page. Still, I can’t see why we can’t also use it to refer to YouTuber’s who ‘bounce’ after just viewing a small portion of a video.

Fourth on the list is my video on how to fix a leaking Caroma toilet. Once again the watch time is almost double the view time. The same with my latest video Kmart handheld steamer review, which is just over a week old and has more than twice the amount of watch time compared to views.

All this tells me that people go to YouTube to resolve problems which is why the ‘How To’ videos are so popular. Review videos are also popular for the same reason.

Something else I’ve noticed with my freestyle motorbike video is that while it’s had over 400,000 views and 552 likes it’s also got 211 dislikes. If I were going to do that video again, I would edit a lot of the poor footage out. I’m sure this would have improved the view time as well as increasing the likes.

You’ll notice with my latest video below how I’ve tried to make it as professional as possible.